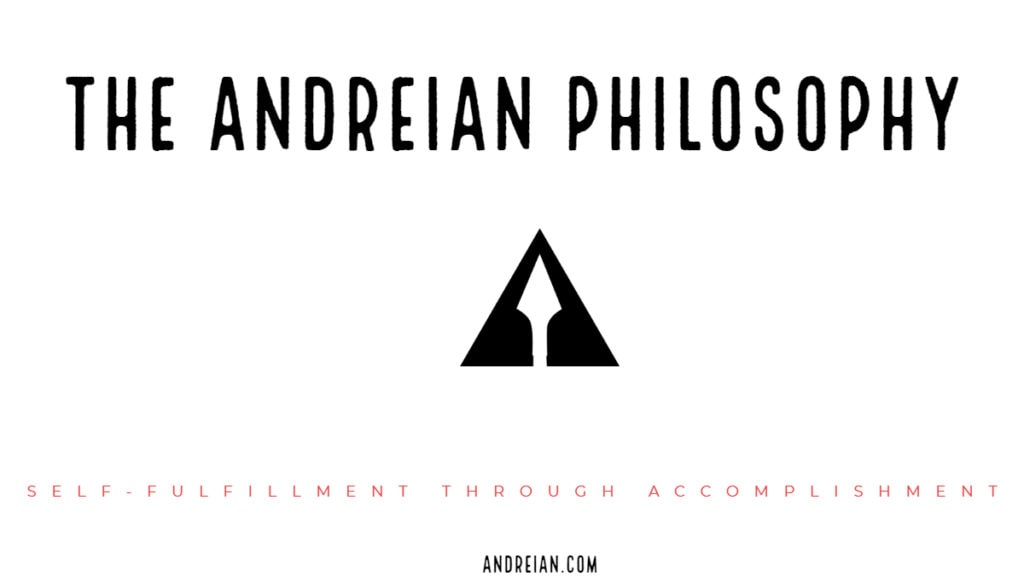 The Andreian Philosophy follows a creed: Self-fulfillment through accomplishment.

We believe a good life is an accomplishment filled life; Ancient Honor for Modern Conquerors.

The mission is to help all men create meaning and pursue accomplishments while chasing the greatest version of themselves.

True mastery is an illusion. GOOD. Meaning does not come from completing it comes from improving.

Finding a path, or multiple paths provides meaning and identity to all men. Finding a path is finding a purpose. All men need purpose.

Purpose is a virtue that the modern world is forgetting about.

Andreia, ‘manly’ spirit, is needed to counter faint-heartedness, laziness, and over-attachment to pleasure.

It involves an attitude of ‘taking the fight to the enemy’, where the enemy is ones own foolishness, vice and ignorance.

Andreia also manifests itself as a willingness for, even a love of, toil and effort.

It is one of the four cardinal virtues, along with prudence (phronesis), temperance (sophrosyne), and justice (dikaiosyne).

Aristotle noted that, as with other virtues, is an optimal level (a “mean”) between the extremes of too little courage (cowardliness) and too much courage (rashness).

This perfect description comes from John Uebersax’s website. He is a Ph.D. who studies Greek Philosophy in Psychology.

How Did Andreia become Andreian?

Andreia describes the hero ideal. A proper way to live–the right way to be. A concept to master but impossible to perfect. It’s everything I want to be.

An Andreian is someone who follows the philosophy. I like it as a personal title. You don’t have to identify with it. Although you can if you want to.

An Andreian finds their path or paths. Then chases accomplishments and mastery in each path.

Andreians choose their definition of accomplishment.

Spending time with family can feel more fulfilling than a financial victory. It’s different for everyone. Set your metrics.

You get to decide what an accomplishment is. Then do everything you can to get more. As you chase more growth you become better. More confident. And experience a clarity of purpose people are willing to die for.

You’re competing against yourself.

Beating yourself is a never ending commitment

These three components make up the content of the philosophy and the code.

Each pillar relates to the creed: self-fulfillment through accomplishment.

Finding your way and your why

The Andreian Philosophy requires individuals to find their way & their why.

Your way is your calling–what you are meant to do for the rest of your life. This is your purpose. Without purpose our lives have no meaning.

Science and progress killed God. Most People used to find meaning in their religious beliefs as opposed to in their actions.

Now people lack meaning and do not connect with their actions. It is a miserable place. Or they wrongly find meaning in empty, rotting ships like diet, gender, or political identity.

Mental illness is at an all-time high. It’s easy to be depressed if your life has no meaning.

A lot of sad, miserable people have nothing going on in their lives at all.

All Andreians have two missions: The first is to find their way and their why. Their masteries.

After that, Andreians chase mastery in each skill or talent.

Dedicate your life to these paths and you will be rewarded with meaning and identity. But you have to work hard. Really hard.

Musashi was the greatest swordsman to ever live. He killed over 65 men in one on one combat. He probably killed more in uncounted duels and the wars he fought before becoming a wandering Ronin.

He dedicated his life to the sword. He chose a single mastery and pursued it until death.

A large quantity of The Andreian Philosophy is based on Musashi’s philosophy contained inside The Book of Five Rings.

A philosophy and a code to live by based on continuous improvement.

The Andreian philosophy is for anyone who wants meaning. It’s an ongoing code I’m writing. An ideal. A combination of many great philosophies and warrior cultures of the past with the best thinkers of the present.

A code and philosophy for meaning and purpose.

Like Musashi, the Andreian Philosophy also requires adherence to mastery. Musashi picked one mastery. The Sword.

You don’t have to pick one mastery. This way doesn’t make sense for most people anyway. You can think of outliers who should and did pick one path.

Picking one mastery from each pillar is recommended: Mind, body and spirit.

You have three different purposes to nurture with three paths. This method creates balance and has other benefits.

It’s unlikely to become bored or frustrated with the repetition needed to be really good at something with three options at your disposal.

However, you can pick as few or as many masteries as you want. I’m writing this as I would do.

My goal is for people is to use these writings to build their own philosophy and code. So please, borrow what you like and disregard what you dislike.

Your masteries will naturally work together.

While spending time in your body mastery, you clear your mind for other paths.

What you spend time learning will help you become more spiritual, as identity forms through your mental strain.

Patterns and observations you find in one area will help other areas progress. Like Musashi said, “If you know the way broadly, you will see it in all things,”

With three masteries you get to walk forever. You have identity. You are talented and can become more at any age.

If you get stuck in one mastery, you pivot to another pillar. Then use insights from one to help solve the problem or escape the plateau of two or three.

People without paths are wandering ghosts waiting to die.

The goal is self-fulfillment through accomplishment. MEANING. The Andreian Code helps by combining the wisdom of ancient honor and modern conquerors.

I want to help people find meaning the way I found meaning. Without being too pushy. Without lying or overstating what’s happening or what you can expect. Without aggressive, annoying and counterproductive marketing.

Without preaching this way is the best way. Because it’s not, and it’s up to you to find your way and your why.

You are the accumulation of the five people you spend the most time with.

Sebastian Junger is a journalist. He embeds himself in war zones to cover stories and write books about what he sees.

In his book, Tribes, he joins a group of American soldiers in Afghanistan.

The book isn’t a book about war, it’s about belonging. Even in a packed tent full of young men, snoring, he never slept better. He says being a war journalist was some of the best moments of his life. Not because of the war, but the connection with the soldiers.

When he came back from war he couldn’t sleep. Junger had PTSD because he lost his tribe.

Bringing goal-driven men together, creating tribes, is one of the goals of this project.

Men need to be part of a group. It’s a perversion to be a lone wolf and it isn’t good for our health.

Finding meaning in all the wrong places

Unfortunately, most groups where men look for meaning aren’t good for them. They’re innate. No clear or group-benefiting purpose. Based upon a trait rather than a mission. Men need to be part of a group that helps them. Gives them identity.

Identifying with gender, sexual preferences, race, political party, the food you eat–really? The food? Is pointless and hollow.

There isn’t any progression. No goals. No purpose, difficulty, or meaning.

Part of the mission is to bring back tribes. Put men in groups again and make the Andreian Philosophy one of the good groups to identify with.

The Andreian Code is a guide to help fulfill the self-fulfillment through accomplishment creed.

The code will be free, for everyone, forever. The Andreian Code is one of my paths regardless of whether or not anyone reads it. I’m writing the content for me. I hope it hopes someone else too.

The Andreian Code will be monetized. Paperback sales, hard book, audiobook sales, apparel, accessories, some other ways too. However, the free version will be no different than the paid version. There isn’t a “light” version of the Andreian code. The sole difference between free & paid is the format.

The code will be updated frequently and live on multiple platforms. you will get the updates automatically at no cost, with the exception of physical copies for obvious reasons. But those will only come out periodically.

Money shouldn’t be a barrier to knowledge.

Who is the Andreian Code for

American society is overly-sensitive today so it’s important to get your stance out before someone accuses you of a title you can’t shake.

It doesn’t matter what color your skin is, your mental state, your sexual preference, or your gender.

However, the Philosophy & Code are conceptualized for men, because I am a man writing it and believe I have no right advising a different gender, which I haven’t and will never, ever experience. To be honest, I don’t feel like I have any business advising other men, either.

Concepts like gender, race, diet or sexual preference do not matter. They are distractions from the path.

None of these determine who a person is. Instead of judging based on traits, we judge based on how cool a person is. Fairly simple to understand.

If a person is cool with you and you enjoy their company that’s all there needs to be. Do they help you forward on your path or retard your progress? That’s what matters.

Words should be measured for their intent instead of their face-value.

Cars are measured for their purpose & intent, not their existence. If they were, cars would be banned due to the number of annual fatalities. Sort of like guns. Or unhealthy food.

where does the code come from?

Early in my teens, I read my first self-help book. The Game. The purpose was to learn how to talk to girls because I was too shy. The game introduced me to reading. I love reading. Reading introduced me to philosophy, which taught me learning is something you do forever.

The information of the Andreian Code comes from books I read, topics I study like philosophy; podcasts, audiobooks, articles, studies, and conversations.

I am a compulsive note-taker and information organizer. I have been for quite some time. I take notes from everything I learn using Evernote. I organize these notes into my personal philosophy.

The Andreian Philosophy publishes content related to the self-fulfillment through accomplishment creed.

If I were to describe it in I phrase. I would tell you the content is about getting better. This type of content resonates with individuals who may like the philosophy and the code.

We get a commission for affiliate product recommendations and light ad revenue.

Eventually, we will also profit from product sales. These earnings allow me to spend more time producing content and improving the code.

I enjoy the work and want to spend a large portion of my life dedicated to it.

You can write for us if any of this resonates with you. You should have a good idea of what we’re about if you reached the end.

You’ll get a bio as a writer and can send one link back to your work if you’re published. We don’t like spammy, self-promotional content.

Contact us if you have any questions or have something to say.